On the occasion of the 75th anniversary of the United Nations, the Multi-faith Advisory Council (MFAC) organized an online conference titled “Faith in the UN: Commemorating the 75th Anniversary of the United Nations and looking to the future”. This event provided a platform for representatives of faith-based organizations (FBO), faith leaders and key voices of UN agencies to discuss a variety of pressing issues and their respective roles in dealing with them.

The unprecedented pandemic serves as a stark reminder of the need for global cooperation across national borders, diverse cultural and religious backgrounds and all generations. Addressing cross-cutting global challenges, including rising inequalities, the climate crisis and protection of human rights, demands active collaboration with civil society, at a time when global partnerships are deteriorating. In bringing together faith-based actors, interfaith organizations, religious leaders and representatives of UN entities, this conference will reaffirm a collective commitment to multilateralism and seek to realise a better future for all. 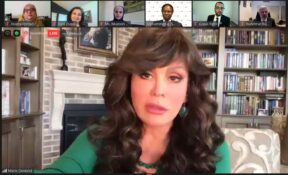 Bani Dugal, Co-Chair of the MFAC and Principal Representative of the Baha’i International Community to the UN said: “The Multi-Faith Advisory Council to the United Nations Interagency Task Force on Religion and Sustainable Development is looking to the UN, and its member states on the occasion of its 75th Anniversary, to take decisive steps toward building a future founded on justice, equality, and unity. Recognizing the transformative power of faith to awaken in populations the desire to work for the betterment of their communities, faith-based organizations also have an important role to play and represent a motivating source of inspiration and hope during this turbulent time in history. Through helping communities to better understand the Sustainable Development Goals, they can galvanize the commitment, support, and collaboration of countless souls as active protagonists working toward the advancement of civilization”.

Dr. Mohamed Elsanousi, Executive Director of The Network for Religious and Traditional Peacemakers, noted that, “This is a significant moment for faith-based institutions to partner and collaborate with multilateral organizations, such as the UN. Multilateral institutions alone cannot achieve the 17 Sustainable Development Goals. Collaboration is critical for to advance Agenda 2030 and promote the common good, especially in these unprecedented times.”

About the Multi-faith Advisory Council

The Multi-faith Advisory Council (MFAC), an informal and voluntary entity that consists of more than 40 religious leaders and heads of faith-based organizations (FBOs), was established in 2018. The composition of the Council reflects the diversity of religions, regional and national presence, and covers different thematic areas that mirror the UN’s mandate. The MFAC, which serves as a unique space for convening faith-based partners as advisors to the United Nations, in their human rights, peace and security, and sustainable development efforts, is committed to uphold multilateralism and international human rights through multi-faith collaboration around/for Agenda 2030.

About Interagency Task Force on Religion and Development (IATF)

Founded in 2010, the UN Interagency Task Force on Religion and Development (IATF) supports the work of the United Nations entities towards the shared objective of learned, strategic and sustained engagement with key partners in the faith-based world, to support respective and collective efforts to realize international development goals. It aims to foster knowledge exchange on the intersections of religion and faith-based actors with the UN system’s mandate in fields that include development, human rights and peace and security. The IATF currently includes more than 20 different UN agencies and gave birth to the Multi-Faith Advisory Council (MFAC).